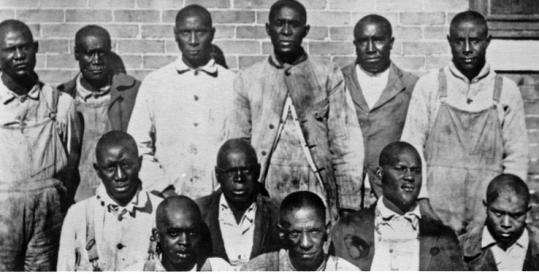 The 12 men condemned to die in connection with a 1919 massacre; the Supreme Court later overturned the verdict. ("On the Laps of Gods")
Email|Print|Single Page| Text size – + By Jan Gardner July 27, 2008

"Breaking Dawn" (Little, Brown), the final installment in Stephenie Meyer's well-loved vampire series, the Twilight Saga, won't be released until 12:01 a.m. Saturday, but it's already breaking records. For weeks, advance sales of the young-adult novel have kept it in the No. 1 spot at Amazon.com.

Online discussion forums are abuzz with speculation about the fate of the book's protagonist, Bella, a high school senior who is in love with a vampire. The excitement is a bit like the mania last summer over the final "Harry Potter" book.

A pre-publication party on Palmer Street in Harvard Square will feature goth manicures, a trivia contest, a vampires-versus-werewolves chess match, and a costume contest for fans dressed up as series characters. The festivities begin at 10 p.m. Friday and will end at midnight, when the Harvard Square Coop, like many other bookstores, will open to ring up sales of "Breaking Dawn."

Offers of help have been pouring in to Jon Nelson, owner of Bunch of Grapes Bookstore on Martha's Vineyard. A fire on July 4 badly damaged the shop, on Main Street in Vineyard Haven, and destroyed its inventory of 75,000 books. Nelson plans to reopen but does not have a timetable yet. In the meantime, Steve Fischer, a former Bunch of Grapes employee who is executive director of the New England Independent Booksellers Association, is assembling a task force to help Nelson. Among the members is Joan Grenier of Odyssey Bookshop, in South Hadley. Her store suffered two major fires in the 1980s.

"On the Laps of Gods: The Red Summer of 1919 and the Struggle for Justice That Remade a Nation" (Crown), by Robert Whitaker, documents a massacre in Arkansas of more than 100 black men, women, and children. For David L. Evans, a senior admissions officer at Harvard University, the book is a startling revelation of a tragedy that hit close to home.

In a message posted on a friend's blog, Professor Kim's News Notes, Evans wrote, "My mother was a little girl and lived within three miles of the epicenter of the massacre. . . . Even so, neither she, her siblings, nor our grandmother ever wanted to discuss it. . . . I now understand better why they were reluctant. Some of the [massacre] perpetrators and/or their kinfolk were still alive and powerful in Phillips County during my childhood."

The massacre followed rising tensions between white landowners and black sharecroppers organizing a union. The US Supreme Court set aside the verdict that sentenced to death 12 sharecroppers.

Evans continued, "In fact, I used to caddy for one of the men whose testimony helped convict the 12 men, but I had no way of knowing his evil history."

He proudly notes that two leading figures in the legal proceedings were Boston-born graduates of Harvard Law School: Moorfield Storey, who represented the defendants before the Supreme Court, and Justice Oliver Wendell Holmes, who wrote the landmark decision.

Pick of the week
Kenny Brechner of Devaney Doak & Garrett Booksellers, in Farmington, Maine, recommends "Looks," by Madeleine George (Viking): "George, a playwright, is a marvelous stylist. This insightful and compelling young adult novel provides a fascinating treatment not only of eating disorders, but of plagiarism and the nature of theft, possession, and revenge."