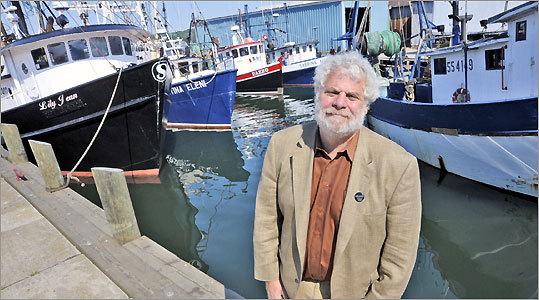 The colorful and compact city of Gloucester has a way of getting the nation's attention. In 1997 it was Sebastian Junger's best-selling book about a lost fishing trawler, "The Perfect Storm." In recent weeks, national media has rushed to the city of 30,000 after a Time magazine story (since called into question) reported a pact by teenage girls to become pregnant.

Clearly the timing was right for Mark Kurlansky's new book, "The Last Fish Tale: The Fate of the Atlantic and Survival in Gloucester, America's Oldest Fishing Port and Most Original Town."

The book is more about people than fish. It explores Gloucester's complicated historical, topographical, maritime, and cultural tapestry. Yet its central theme is the decline of fish stocks and its implications for the city's culture and identity. Of Kurlansky's 18 books, two others had a maritime focus - the 1997 bestseller "Cod: A Biography of the Fish That Changed the World," and 2006's "The Big Oyster: History on the Half Shell" - though others paid attention to maritime culture. But no other American town is so identified with fishing and the sea as Gloucester.

Kurlansky, 59, majored in theater and journalism in college, but when his playwriting career didn't work out, he became a foreign correspondent, in Europe and elsewhere, for several American newspapers. His first book, "A Continent of Islands: Searching for the Caribbean Destiny," appeared in 1991, and since then he has been prolific and eclectic in his subjects: the history of salt, the Basques, the return of Jews to Europe after World War II, and a future book about a town in the Dominican Republic that has produced 78 Major League Baseball players. He lives in New York with his wife and 8-year-old daughter and rents a summer home in Gloucester. On a recent visit to Boston, he talked about the Cape Ann city's folkways and challenges.

Q. What is distinctive about Gloucester?
A. It started as a fishing station, and its development was always about fishing. It's a man-made island, and developed with an insular mentality. There are old-timers who used to claim they had never left the island, and people still talk that way. It was a place of tremendous tragedy and pain - the monument [to fishermen lost at sea] has 5,000 names, but historians think that's about half the real number. It's a place that was constantly replenishing its population - lots of people leaving and new people coming. Its population hasn't grown in 100 years. It also has an unusual ethnic mix - Irish and Portuguese, Sicilians and Jews.

Q. What about the cultural and social structure?
A. It's a place where you go to a party and there will be fishermen and other blue-collar people, and also wealthy people and painters and writers, all mixed together in a way that you don't find in many places. I know a lot of people who wanted to send their kids to college, to have them move on. So they go to a reputedly good college, then four years later they're back and want to work on the boats. I hadn't realized how big is the issue of preserving Gloucester from the threat of tourism. It's unusual to find a blue-collar community with such a sense of historic preservation. People say, "We don't want Gloucester to become Newport."

Q. The city seems to have a strong sense of itself.
A. They have a tremendous sense of themselves. They have a way of using Gloucester as an adjective: Something is "very Gloucester." They know they have something special, and that's why they want to keep it. Yet there are huge money problems. They don't want Gloucester to change, but they wouldn't mind having better schools, and keeping all the fire stations open, having money to fix City Hall, which is falling apart, fixing the sewer system, which they're mandated by the state to do, but don't have the money for.

Q. What is happening with Gloucester's fishing economy?
A. It's much worse now than when I was working on "Cod." A lot of people - fishermen, government, scientists - have been working on this problem and failing. I think it's because once [a fish population] starts unraveling, it unravels at a more dramatic rate than anybody imagines, because of the decline of biodiversity and the effect of global warming on fish populations, which no one is really studying. I don't see an end to fishing, but it might come to what has happened to farming. A few corporations would have all the licenses and, since they would own all the vessels, they could operate under all the restrictions.

Q. Is there any way to turn it around?
A. I keep saying - and eventually I might get thrown out of Gloucester - that they should stop bottom-dragging [i.e., harvesting fish by dragging nets along the ocean floor]. Go back to hook-and-line. Because Gloucester is such a famous place, they could use it in marketing - market Gloucester fish from an environmentally friendly, dragger-free port. You would have to get government and the financial sector to finance the transition. You can't just say to these guys with everything they own invested in these draggers to stop dragging. If you finance them getting into it, they would earn more money per pound, wouldn't have a catch limit, and probably wouldn't have days-at-sea limits. I think we have to be prepared to take some bold steps, because the modest steps we have been taking haven't worked, and have made it pretty close to impossible for fishermen to earn a living.

Q. What draws your interest as a writer? What is a hallmark of a Mark Kurlansky book?
A. I'm usually writing about survival. I never planned it, but it runs through all my books. I look for things that make good stories. I would never have done the salt book ["Salt: A World History"] if salt had remained valuable, but the fact that it was so valuable, but lost its value, made it a good story. If Gloucester were this great place with a great fishery, the book wouldn't have worked.

Q. It sounds more like group, or cultural, survival than physical survival.
A. I'm friends with Studs Terkel [author of 20th-century cultural histories]. He's 96 and practically deaf. I just saw him when I was in Chicago. He's very smart and keeps up with news and events, but he said to me, "I'm living in the wrong century." It's no longer a world that he belongs to. We live in a time when things change so quickly, we all at some point end up feeling we don't know how to adapt to the changes that are going on.