Novel retraces the immigrant experience, then and now 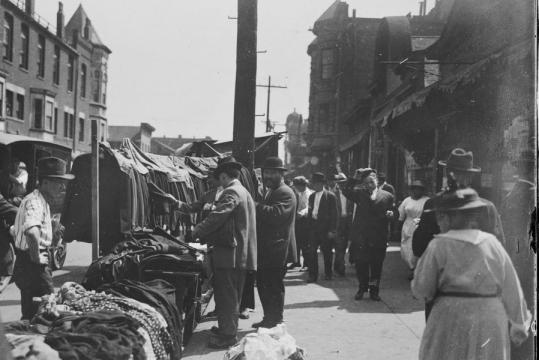 The book is sprinkled with a mix of new and old photographs, evocative but without captions. This one is likely of early 20th century Chicago.
Email|Print|Single Page| Text size – + By Maud Newton June 22, 2008

The late, great writer and World War II veteran Kurt Vonnegut Jr. was captured by the Germans and confined to a prisoner-of-war camp in Dresden. When an American air raid destroyed the city, he was put to work carrying civilians' corpses. The apocalypse haunted Vonnegut ever after. "Believe me," he wrote, "it is not easy to rationalize the stamping out of vineyards where the grapes of wrath are stored when gathering up babies in bushel baskets."

A similar sense of the indefensibility of bloodshed underlies Aleksandar Hemon's stunning new novel, "The Lazarus Project." The book opens on March 2, 1908, but the date could be a century later. A "slim, swarthy young man" with cold eyes turns up at the door of Chicago's police chief, and thrusts an envelope at him. Taking the stranger for an anarchist, the lawman restrains him, summons the missus, and orders her to do a pat-down. A struggle ensues; she thinks she feels a pistol. Soon the man is dead, his blood spattered across the room. The assistant chief pulls down the victim's pants to verify his ethnicity. " 'He's a Jew all right,' he announces, leaning over the young man's crotch. 'A Jew is what he is.' "

The deceased is one Lazarus Averbuch - a fitting name, given that Hemon has resurrected a real man, an immigrant who escaped a brutal Kishinev pogrom only to be gunned down in the Land of Opportunity. Lazarus's death, and the grieving of his sister Olga, unfold in alternate sections from the story of Vladimir Brik, a Bosnian native turned Chicagoan, who's obsessed with understanding what happened to the Averbuchs 100 years before. Eventually these two separate threads wind together.

Brik, like Hemon himself, was visiting the states when civil war erupted in his native Sarajevo. He stayed, worked odd jobs, and mastered English. Now he's a newspaper columnist writing about immigrants' experiences. Although the column pays a pittance, Brik devotes himself to writing, thanks to his American surgeon wife Mary. Our hero is uncomfortable being "kept by my wife," when he hails from a country where "money has a man's face." Soon, though, he lands a research grant that funds a trip with his boyhood pal Rora to Lazarus's hometown.

Hemon has always drawn on his own experiences in fiction, and Brik's quest has a real-life counterpart. Several years ago the author traveled with an old photographer friend to retrace Averbuch's path. In the book at least, the search is not merely for the facts of one man's life, but for more complex truths about life and death, hope and despair, love and hate.

Hemon's characters eschew the notion that truth is tidy, or literal. Being with Rora makes Brik wistful for Sarajevo before the war. Then there was "a kind of unspoken belief that everyone could be whatever they claimed they were - each life, however imaginary, could be validated by its rightful, sovereign owner, from the inside." Brik can't help but compare the funny and poignant tall tales of his past with the bland falling-in-love narratives of Americans at weddings, where "everybody was happy now, you could tell, the table laden with bliss and future, no sardines of sorrow served." At a reception, he tries to puncture his seatmates' tinny optimism by telling an alternate history in which the Berlin Wall is "brought down by horny rodents."

" 'I find that hard to believe,' " Mary says. It's one of the few times Brik's wife speaks. The most faintly drawn character in this otherwise vivid novel, Mary is a cut-out of a successful American woman - holds her hand over her heart for the anthem, wears a water-lilies apron, is obsessed with order - who discourages Brik from talking about his guilt over the Bosnian genocide. Her flatness is part of the point: Our narrator is falling out of love with a Midwesterner whose limited experience prevents her from comprehending evil. Brik's ultimate realization that his wife "was like everybody else" only in the sense that "there was nobody like her" does not make her character come alive.

In contrast to Mary, the grieving Olga is wildly, palpably real. At the mercy of suspicious cops and reporters, she hobbles around on broken shoes, smelling of excrement, and mentally composing letters to inform her mother of Lazarus's death. And when Brik and Rora reach Kishinev, the town Olga and Lazarus fled, and find a beautiful young Averbuch who leads them to the family graveyard, it becomes clear that Brik longs just as much to resurrect Olga, and the men he and Rora used to be, as to track Lazarus. " 'If there are more dead than living,' " he says, standing amid the headstones, "then the world is about death, and . . . What are we do to with all the death?" Tragedy will force him to answer this question.

Maud Newton, who writes about books at MaudNewton.com, is a writer living in Brooklyn.