The triumph of the 'heil' 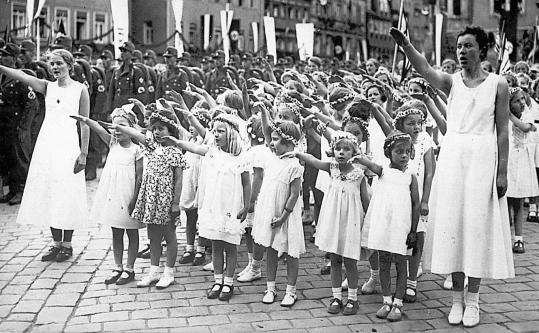 The Hitler Salute: On the Meaning of a Gesture
By Tilman Allert. Translated from German by Jefferson Chase
Metropolitan, 115 pp., illustrated, $20

As the twig is bent, so bends the bough. For the Nazis it was important to educate little children in performing the supreme gesture of submission to Adolf Hitler's "Thousand-Year Reich."

German sociologist Tilman Allert cites a postmistress who chided two little girls, come to mail a letter, for greeting her with "guten tag." Instruction improving on correction, she led them outside to practice the "heil Hitler" along with the arm lift. To perfect the lift, one kindergarten teacher had the children elevate their right hands to loop their lunch bags over her raised arm. A fairy-tale illustration shows the prince waking Sleeping Beauty with a kiss and a Nazi salute.

Allert's specialty is listed as "microsociology." Micro as in microbe, a tiny organism that in its billions swelled into the Black Death. His "The Hitler Salute" plays all kinds of variations on a seemingly minor if absurd rite; not, of course, in the least comparable to death camps and wars of destruction. And yet, from instances that range between the comic and the grotesque, Allert traces a tragic connection. Without the pomposity of assertion he achieves an indelible suggestiveness.

The salute was decreed at the start of Nazi rule in 1933, with the stiff lifted arm for formal encounters. The armed forces were permitted to retain the military salute, but after a failed attempt by a group of officers to assassinate Hitler in 1944 they were granted their request to adopt the "heil" as a sign of fealty.

There was a massive campaign to eliminate the traditional greetings: the aforementioned "guten tag," "auf wiedersehen," "salus," the Bavarian "grüss gott," and Hamburg's peculiar honk: "moin, moin." The official students' organization declared that to use these was to incur the "suspicion of consciously obstructive behavior." Washroom attendants, shop clerks, professors, among millions of others, were expected to comply.

In all this, Allert argues something far graver than the boastful rodomontade that was parodied abroad, for instance in the fusillade of "heil Hitlers" that provides one of many explosive charges in Ernst Lubitsch's marvelous 1942 comedic film "To Be or Not To Be." It destroyed, he writes, the essence of the greeting.

Traditional greetings, with their joining of glance and handshake, pull the other person close. The "heil" raises the glances into the air, addressing not the other but an invisible Hitler. And the arm, shooting up, pushes the other away. (Martha Dodd, daughter of the US ambassador, reported a "heil" from Joachim von Ribbentrop, the foreign minister, that all but forced her to step back to protect her nose.)

There were the whole-hearted heilers. There were those who tried to subvert the gesture. Execution was ordered for two vaudeville chimpanzees whose trainers taught them the salute. The authorities couldn't figure out (though we can) whether the trainers were being exaggeratedly compliant or sneakily defiant.

My favorite subversion was by a Lutheran pastor, Karl Immer, who would answer a "heil Hitler!" by barking back, "Immer!" The word means "always" so it was ostensibly OK. But it also reproduced the bourgeois custom of responding to an introduction with one's last name.

More ambiguous is a photograph of a Benedictine abbot, Alban Schachleiter, walking past a line of storm troopers, his arm raised as for the salute but his hand cupped downward in the traditional priestly benediction. Blessing? Defiance? Blur?

Tilman acknowledges that for many Germans the "heil" was delivered pro forma, and with a kind of inner disassociation. That did not lessen the damage, though. He writes of "the apathetic ones, who felt themselves superior to their own actions and conformed to the new edicts as though their acts were not their own."

And so came the mistrust, the vacuum created between people allowing them "to disassociate present actions from future consequences and fostered indifference to those present before them." Inevitably we think: next stop, Auschwitz.

Tilman puts it more subtly. Greetings, he writes, "remind us of the need to live our lives by linking them to those of our fellow human beings. They make us aware of the connection between anticipation and memory, the future and the past . . . Greetings reassure us of our existence here and now, for ourselves and for others."