Edging toward the inferno of war

How America's character, ideals were shaped in the tumultuous 19th century 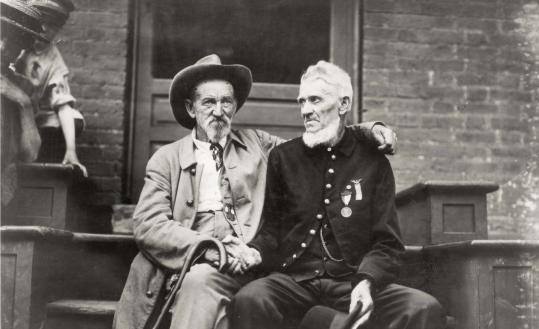 Once it was not too difficult to find comprehensive histories of the United States from the Colonial period to the present. This is no longer the case. The explosion of scholarly perspectives in American historical scholarship has multiplied the challenges confronting any writer who wishes to offer an extended overview of the national past. How does one weave together what we now know about race, ethnicity, gender, class, and region? How does one treat the cacophony of voices that must be heeded in attempting to compose such a story?

Undeterred by such concerns, Walter A. McDougall, a history professor at the University of Pennsylvania and a Pulitzer Prize winner, has embarked on preparing a multivolume history of the United States. "Throes of Democracy" is the second volume in that series. Although the subtitle proclaims this to be a study of the Civil War era, in truth it is an overview of American history in the middle of the 19th century, with less than half of the book focusing on the coming, conduct, and consequences of that conflict. Nor should one mistake this narrative for a traditional retelling of battles and leaders, politicians and elections. Rather, McDougall wants to tell us something about the American character and ideals in belief and practice in an age of expanding democracy, explosive economic growth and development, and violence.

McDougall presents a skeptical view, brushing away pretense and pride to offer a troubling picture of the growing republic as it encountered its most crucial test in the crucible of civil war. Americans deceived themselves about who they were and what they believed: They embraced a civic religion of exceptionalism that excused much and rationalized more. Yet it is this very self-deception that, he muses, helps to explain why the United States has been so successful.

As the narrative blithely skips along, it stumbles over minor if irritating inaccuracies rendering the text unreliable, especially when it comes to describing military actions and political controversies: This is too often the case when the restless need for a "good read" spiced with witty asides and summary judgments can't be restrained by the requirements of scholarly research. The result is that the reader learns at least as much about McDougall's take as anything else. That take in turn makes ample use of European travelers' observations, which revel in smug dismissiveness with plenty of head-shaking at the naive, bombastic, culturally bland Americans. McDougall finds much common ground with these critics, who were keenly aware of the shortcomings of others but not always as searching when it came to themselves.

Undeniably there are delightful nuggets to mine, and some of McDougall's insights will cause readers to reflect on what they thought was true; a few will even bring a smile to one's face. Clearly the author enjoys taking us along on his rollicking jaunt, and he does not shy away from making the ride especially rough now and then. Occasionally he resorts to presenting extended biographical sketches: "sidebars" telling the story of newly admitted states, which are prone to offer more in the way of asides than understanding. His tendency to lapse into conversational prose will delight some while causing others to wince. To cite but one example, of Ulysses S. Grant's efforts to protect black freedom during his presidency, McDougall declares, "By golly, he tried." Indeed.

McDougall takes great pride in puncturing what he assumes to be the preconceptions of his readers, perhaps hoping that someone who comes away from this book somewhat more jaded or questioning about the national past might carry that forward into understanding the present. There's nothing wrong with that: Americans who celebrate a triumphal narrative of progress and success rarely pause to consider how much American democracy in the 19th century coexisted with slavery, wars against indigenous peoples, a brutally competitive and exploitive capitalist order, and continuing themes of racism, nativism, and sexism.

However, this unsavory record raises another unsettling question. If such untoward behavior is the case, then exactly what is the nature of the "success" McDougall highlights? Perhaps he needs to follow the logic of his argument to its conclusion rather than evade that task. Simply offering witty asides and sarcastic comments will not suffice. To what degree did Americans stumble into their destiny, and to what extent was it a result of ruthlessness barely concealed by platitudes?

If you like your history irreverent and iconoclastic, this is the book for you. But one wonders whether McDougall would have been better served by simply sticking to highlighting contradictions, hypocrisies, and contrast galore in a more concise book about what Americans need to believe about themselves, their history, their civic religion, and their role in the world rather than offering these insights and opinions in a book purporting to be a history of the United States during a crucial period.

Brooks D. Simpson is professor of history at Arizona State University. Among his books is "Ulysses S. Grant: Triumph Over Adversity."