Recalling RFK's campaign of hope, and what might have been 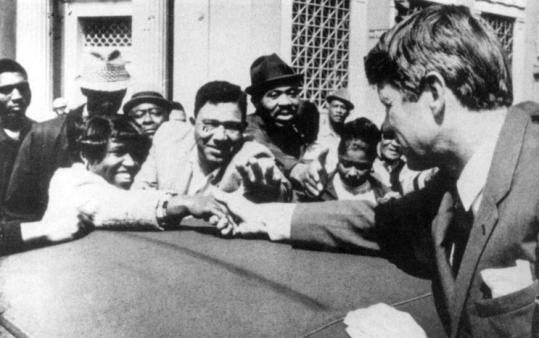 The images from "The Last Campaign," Thurston Clarke's powerful account of Robert F. Kennedy's campaign for the presidency - the vibrant, hopeful campaign that ended senselessly 40 years ago this week - impel themselves on the reader, touching chords of memory and sorrow.

There is among them a compassionate image, from June 3, the day before the fateful California primary.

Kennedy was campaigning in Watts, the black neighborhood in Los Angeles. "Spectators," writes Clarke, "hurled themselves in waves against Kennedy's slow-moving convertible," their hands slapping his.

At one point, Kennedy spotted a 5-year-old black girl and pulled her into the car, fearing she might fall under its wheels.

"He placed her between his knees and began whispering in her ear." When he discovered that the girl did not know her telephone number, "he halted the motorcade" and stood with the little girl, "[she] clutching Kennedy with one hand and [her] stuffed rabbit with the other" until he found someone to drive her home.

And there is a confrontational image, from late April at the Indiana University Medical School.

The audience had been "generally hostile," and then one student asked from where would the money come for the neighborhood clinics and similar programs that Kennedy was proposing.

He continued: "Let me just say something about the tenor of that question and some of the other questions. The fact is that there are people who suffer in this country to whom we have some responsibility."

That challenge speaks to the moral thrust of his campaign.

On April 4, in the afternoon of the day on which Martin Luther King Jr. would be assassinated, Kennedy spoke passionately about poverty at Ball State University. That event was overtaken by the assassination, but an audiotape, Clarke reports, "shows him pleading with [the students] as if his campaign, and the nation's future, depended on their becoming as outraged by poverty as he was."

That evening, it fell to Kennedy to break the news of the assassination to a largely black crowd gathered for a rally in Indianapolis. There had been fears that it would trigger violence, but when Kennedy finished, most in the crowd "stood still, weeping and stunned into silence," then "dispersed quietly." And the city remained calm even as riots spread across the country.

For Kennedy, the threat - almost a fatalistic acceptance - of assassination was a constant presence. He spoke often of it to those traveling with him, and perhaps explains, Clarke writes, "why he campaigned so passionately, as if the campaign itself might have to serve as legacy, and epitaph."

Impelled by outrage at the two crises confronting the nation - the war in Vietnam and the battle over civil rights - Kennedy had all but decided early in 1968 to challenge President Lyndon Johnson. Minnesota Senator Eugene McCarthy was already in the race as an antiwar candidate.

When Kennedy finally entered, there were few state primaries in which to run - Indiana and Nebraska in early May, Oregon in late May, then California and South Dakota on June 4, and finally New York. And not only was there McCarthy to contend against, but after Johnson declared that he would not seek reelection, a shadow campaign for Vice President Hubert Humphrey.

Knowing how it will end - Kennedy was shot in Los Angeles on June 5, at 12:15 a.m. local time, and died at 1:44 a.m. local time the following day - it is the sense of what might have been that makes "The Last Campaign" so wrenching.

Clarke addresses that might-have-been in a prologue that recounts the mournful passage of the funeral train bearing Kennedy's body from New York to Washington, "a 216-mile-long chain of grief and despair," along which some 2 million people gave witness, a wedding party standing in a Delaware meadow, five nuns standing in a yellow pickup truck, and at one place, "white policemen cradling black children in their arms."

And, writes Clarke, the riders on the train could see, along with the weeping people, "the derelict factories, creaky tenements, shuttered stores, and crime-battered neighborhoods that anyone traveling this route today still sees, but might not be seeing had Robert Kennedy lived."

Michael Kenney is a freelance writer who lives in Cambridge.