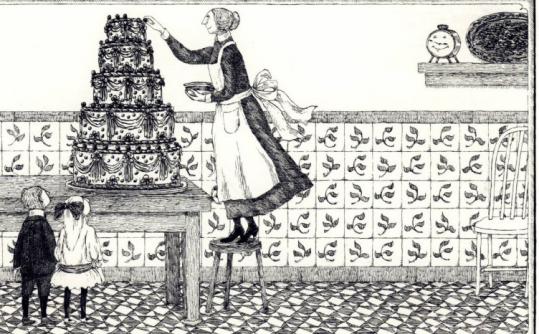 The glory of Gorey
Just inside the house of the late Edward Gorey, a doll's feet are sticking out from under a rug. The scene duplicates one from Gorey's "Gashlycrumb Tinies," a rhyming abecedarian that relates the fates of 26 doomed children. In this case, "G is for George, smothered under a rug."

Other references to the mischievous, macabre book are scattered throughout the rambling house in Yarmouth Port. Gorey, who died in 2000 at age 75, lived there for 14 years. He was not only an artist and writer but a designer of sets and costumes for Broadway and local productions.

Now a museum, the house recently opened for the season with a new exhibit of Gorey's childhood drawings, including cartoons published in The Chicago Daily News when he was 12. The exhibit also showcases his drawings for books he wrote and his illustrations for works by T. S. Eliot, Edward Lear, and others.

The house is stuffed with things that inspired Gorey. He frequented yard sales on Saturdays, bringing home lobster buoys, skulls, and other finds. Some items, such as a set of ornate tassels, are displayed next to the drawings into which Gorey incorporated them. He also loved books, amassing a library of 25,000 volumes with an emphasis on literature from Europe and Asia.

Many of the tour guides, including director Rick Jones, knew the illustrator and are happy to share Gorey stories. Details at www.edwardgoreyhouse.org.

Changes in the square
Harvard Book Store, one of the few remaining independent booksellers in Harvard Square, is up for sale. Boston native Mark Kramer founded the business in 1932 with $300 he borrowed from his parents. Upon his death in 1962, he left the store to his son Frank Kramer, then beginning his senior year in college. "I had no idea what I wanted to do with my life," said Frank Kramer. He decided to take over the store until he figured out his next step.

Now 46 years later, Kramer, 66, is ready to move on. He's hired the Needham firm of Ridge Hill Partners to manage the search for a buyer. "It's all about finding the right person," he said.

Faith and furor
Five years ago Gene Robinson of New Hampshire became the first openly gay priest to be consecrated as an Episcopal bishop. A worldwide furor arose, and the reverberations have continued, with a number of Episcopal parishes effectively seceding from the US church.

Now Robinson takes a turn at explaining his theological thinking about homosexuality, among other issues, in his new book, "In the Eye of the Storm: Swept to the Center by God" (Seabury). In the book's foreword, Archbishop Desmond Tutu, also an Anglican, calls the campaign for gay rights in the Episcopal Church "a matter of justice."

Pick of the week
Suzanne Strempek Shea of Edwards Books, in Springfield, recommends "The Deportees," by Roddy Doyle (Viking): "First published in Metro Eireann, a newspaper published by and for Dublin's newcomers, these eight stories are the first comprehensive literary look at a country experiencing a culture-changing wave of immigration. And there's even a follow-up to 'The Commitments,' which may be Doyle's best-known work."