An autistic student's moment of glory spurs an inspiring story 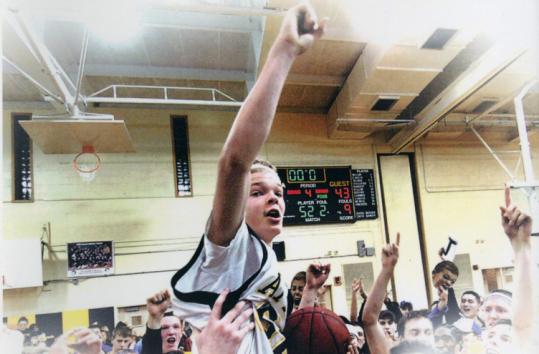 The Game of My Life: A True Story of Challenge, Triumph, and Growing Up Autistic
By Jason ‘‘J-Mac’’ McElwain with Daniel Paisner
New American Library, 243 pp., illustrated, $23.95

In the 1984 Orange Bowl, Boston College's Doug Flutie threw a last-second 48-yard Hail Mary pass to Gerard Phelan that stunned viewers and gave the Eagles a 47-45 victory over the University of Miami Hurricanes. Fans still talk about that game, about that pass, about the talent, determination, and bit of luck that inspired sports lovers everywhere to believe anything is possible if you work and dream hard enough.

Twenty-two years later, another athlete had a similarly life-changing experience. For Jason McElwain - dubbed J-Mac by his teammates - it happened not during a nationally televised college football game, but on the Rochester, N.Y., Greece Athena High School basketball court in front of wildly cheering schoolmates, teammates, friends, and family. Those four minutes - detailed in McElwain's "The Game of My Life" - catapulted him to national stardom.

And those four minutes also challenged our view of what children with autism can accomplish with supportive teachers and the love of a devoted family and loyal friends.

Caught by team cameras, the video of McElwain's amazing achievement - 20 points scored in the final four minutes of the team's last regular-season game, including a school-record six 3-pointers - has been viewed more than 300,000 times on YouTube; it also ran on ESPN and the national evening news. McElwain won a 2006 ESPY Award for "Best Sports Moment," beating Kobe Bryant and the George Mason University men's basketball team. The game made him so popular he even had Peyton Manning's number in his cellphone directory.

My 3-year-old grandson, Jack, was diagnosed with autism about the time of McElwain's incredible game. Tearing up while watching the video, I thought of Jack's diagnosis and wondered if he would someday be able to play high school sports and speak as well as McElwain during his appearances on the morning news. McElwain gave me great hope for Jack's future.

Now that our family has spent two years researching and learning about autism, and investigating treatments for Jack, McEl wain's book spoke right to my heart.

For thousands of parents of children with autism, reading "The Game of My Life" is a window into your child's world. Recounting his memories of growing up with autism, as a child who didn't speak until he was 5 years old, he talks about idolizing his older brother and making friends with neighborhood children. As he discovers sports, we see a young man with exceptional drive and persistence emerge. In his words, he became "more social." He made friends, although at times he was the subject of teasing from the "normal" kids.

But it was the game of basketball that became the center of McElwain's world. Although he practiced shooting hoops every day, and all summer long, he never made the cut on either the high school junior varsity or varsity teams. Instead, he was named the team manager. And he embraced the position.

As the final game of his senior year approached, the coach offered McElwain the possibility that he would get to play for a few minutes. With four minutes left in the game, and their team ahead, 59-31, coach Jim Johnson said, "Jason, you're in," and the rest is history. McElwain's account of those four minutes will make you feel every moment of his excitement and joy.

"I could hear some of our guys on the bench saying, 'Take a shot.' Or, 'Put it up.' But they didn't have to tell me. I fired up another three, and this time the ball rattled the rim and went in. Man, the gym just burst with noise," McElwain recalls.

Coauthor Daniel Paisner has added context to McElwain's story by including comments from his family, therapists, coaches, and teammates. We see his struggles with autism from their point of view. But it is McElwain's words of determination that resonate through the book. "Stay focused," he says to the players during every game and every practice.

Flutie, who has an autistic son, may have identified with McElwain's shining moment on many levels. "His story is an inspiration for all parents and provides hope for those facing a diagnosis of autism," the former quarterback says in a quote on the jacket of "The Game of My Life."