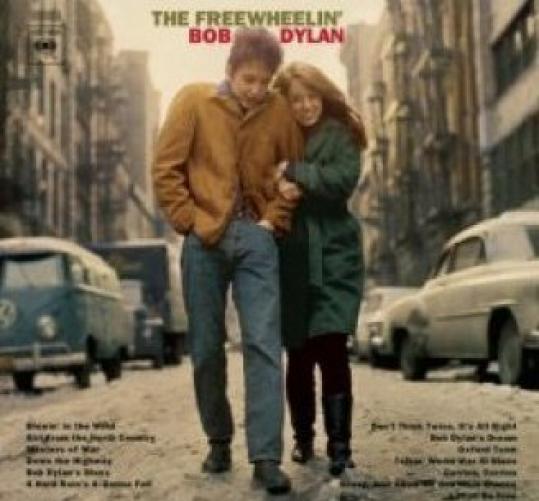 Suze Rotolo, with Bob Dylan on the cover of the 1963 album "The Freewheelin' Bob Dylan." She has written a memoir about their time together.
Email|Print|Single Page| Text size – + By Josh Getlin Los Angeles Times / May 6, 2008

NEW YORK - It was one of the most iconic record album covers ever released, and Suze Rotolo was part of it: On a snowy day in 1963, she snuggled with Bob Dylan as the two walked down a Greenwich Village street. "The Freewheelin' Bob Dylan" went on to become one of his best-known records, but the long-haired girl on his arm was always a mystery.

Now, Rotolo has broken years of silence to tell the story of what it was like to fall in love with Bob Dylan at 17, to introduce him to civil rights politics and modern poetry, and to finally break up with him when the pressures of his stardom became too great. Her new book, "A Freewheelin' Time: A Memoir of Greenwich Village in the Sixties," offers a revealing glimpse of the young artist, whom she calls with understatement "an elephant in the room of my life."

"People will always identify Suze as the girl on the album cover, and she's lived with this since 1963, but that's not the reason to read her book," said Sean Wilentz, a Princeton University professor and historian in residence at Dylan's official website. "She evokes a time and place out of which a good deal of contemporary American culture sprang. It was a time of great freedom, when people were figuring out what they want to be, but freedom is scary."

During their turbulent, four-year relationship, Rotolo deeply loved Dylan, who was 20 when they met. She was there when classic songs like "Blowin' in the Wind" and "A Hard Rain's A-Gonna Fall" were new. She looked on with pride, then fear, as celebrity transformed him and other women pursued him. The author finally decided it was time for her to leave and become her own person. But not before an abortion and emotional breakdown shattered her.

"We loved each other very much and when it ended it was mutual heartbreak," she writes. "He avoided responsibility. I didn't make it easy for him, either. . . . I knew I was not suited for his life."

Among the hundreds of books about Dylan and his career, Rotolo's memoir ranks as big news. "A Freewheelin' Time" is one of the first histories of the folk music years written from a woman's perspective, and it goes beyond gossip to ask a pointed question: How did it feel? Rotolo writes that the era mattered because "we all had something to say, not something to sell."

Their love affair blossomed in the hothouse of Greenwich Village, where a folk music revival spurred on the civil rights movement and led to the birth of modern rock culture. On any given night, tiny basement clubs were packed with talent including Dylan, Tom Paxton, Phil Ochs, Peter, Paul & Mary, and Judy Collins.

Rotolo recalls this era with dazzling anecdotes. But unlike most of the artists who traipse through her pages, she hasn't abandoned the neighborhood. The author, now a 64-year-old artist, still lives there with her husband, a film editor.

"I can only imagine what it must have been like to stand in her shoes," said blues singer Maria Muldaur, who lived in the Village in this period. "Suze was her own person, who loved this guy very much. Suddenly people were stepping over her, pushing her aside to talk to him. "It must have been an overwhelming experience."