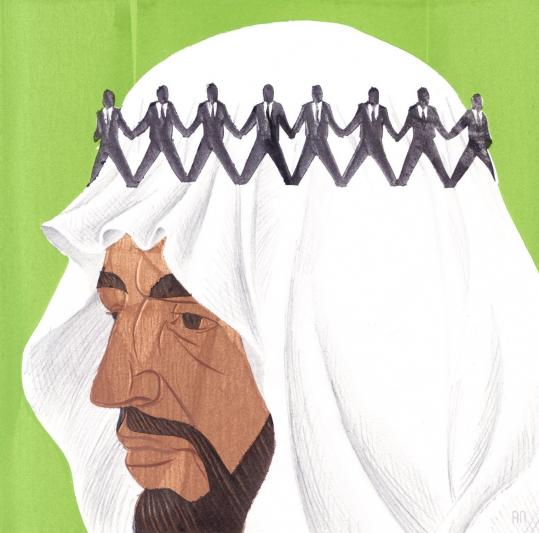 The Bin Ladens: An Arabian Family in the American Century
By Steve Coll
Penguin, 671 pp., illustrated, $35

One of the many conspiracy theories surrounding Sept. 11, 2001, is some inchoate suspicion about the request the Saudi embassy in Washington, D.C., made to fly out Saudi citizens and members of the Bin Laden family in the days after the attack. That Osama Bin Laden's relatives were among those asking to leave and that the government let them go is seen as some sort of indicator of a hidden hand, of secrets, evil deeds. Who let them go?

I did. When the embassy request came to me as the White House crisis manager, it seemed understandable that these people might think themselves at risk after disclosures that almost all of the 9/11 attackers were Saudis. I had arranged evacuation flights for Americans from crisis zones many times when I thought they might be at risk. So I approved the request on condition that the FBI sign off on the Saudi flights and everyone on them. The FBI did not want to interview the passengers then and has not asked to interview them since. Why wouldn't the bureau want to investigate what the Bin Ladens were doing here?

Perhaps because they already knew. The US government did not learn of their presence here only after 9/11. In fact, Bin Ladens had been in the United States for decades, not plotting to blow things up, but usually trying to buy things up. As Steve Coll describes in detail in "The Bin Ladens" (in which I'm mentioned briefly several times), it is one really big family. And a fascinating one. The leader, Osama's father, has well over 100 direct descendants, including 54 children and an ever-growing number of grandchildren. Before we conclude that the father was some sort of deviant, we need to place the family in context. On the Arabian peninsula in that generation, it was common for a successful Muslim man to have four wives at a time, and perhaps twice that number in a lifetime. An Arab friend admitted to me sheepishly that he could not name and identify all of his 20 brothers at a recent family gathering. "You tend to really know only your full siblings, the ones who grew up in your house with your mother." Many Americans with many stepbrothers and half sisters, products of divorces, likely can identify.

Thus, it is not really surprising that Coll, whose prior terrorism book "Ghost Wars" won the Pulitzer Prize, finds that most of Osama Bin Laden's siblings never really knew him. They were too busy trying to make and spend large sums of money.

The story of this family is one of hard work, resulting eventually in vast wealth and a very different lifestyle than patriarch Mohamed Bin Laden knew growing up in the hardscrabble land of Yemen. Mohamed left his native land as a young man to seek work in neighboring Saudi Arabia. What he stumbled on to, then nurtured, was a role as the builder for the royal family. His little construction company did well at projects for them, and they rewarded him with more. When the Al-Saud family became cash strapped at one point before the great oil wealth, Mohamed amazingly loaned them money. When later the Al-Sauds became among the wealthiest people on earth, they rewarded Bin Laden Construction with endless no-bid projects to build infrastructure in a country that had almost none. Soon there were airports and highways and shopping malls, and rich profits for the builder.

Most of Mohamed's children bought in to capitalism in a big way, studying law and business at American universities, starting companies, doing deals. Many studied at Boston-area colleges. Coll recounts how one Harvard Law School student was getting a latte at a Cambridge when he learned of the attack on the World Trade Center. He was Osama's brother Abdullah. Another brother, Khalid, had invested in buying correctional facilities in the Commonwealth as part of a privatization push. Other siblings owned condos in Cambridge and on Boston Harbor.

Coll's account of this family reflects what happened to a whole transitional generation of elites on the Arabian peninsula. Suddenly oil rich, most of them embraced Western values. They studied in America, became talented businessmen and entrepreneurs at a young age, and significantly increased their inherited wealth. But others rejected that path and sought to find meaning for their lives in their cultural past, through religion, and in the fringe politics of pseudo-religious cults. Osama Bin Laden obviously chose this course and was not steered away by a distant father. Nor did the eldest half brother, whom Osama admired, succeed in correcting his ways. The leader of the Bin Laden siblings died young in an ultra-light-aircraft crash in Texas.

Airplanes and their role in the life of the family Bin Laden form a leitmotif in Coll's account. He seems fascinated that so many of Osama's brothers and sisters were pilots, but draws no conclusions. He also notes that growing up in a construction firm, Osama saw a lot of older buildings destroyed, but leaves that thought hanging. He tells us of the frustrating work that I and others did tracing the family's money, but does not add to what was already publicly known from such sources as a book by Osama's former sister-in-law. Nor does Coll clear up the rumors that the Bin Ladens had indirectly invested in a venture run at the time by the man who is now president of the United States. In sum, there are no really new insights in Steve Coll's many details, but there is a window into the two very different paths that a generation of Gulf Arab families has to choose between. We need to understand that tension in their families because the path they select can greatly affect the future of our families.

Richard A. Clarke is former head of counterterrorism at the National Security Council, and the author of "Against All Enemies: Inside America's War on Terror."