Wildly popular in the 1940s and '50s, edgy comics aroused the ire of teachers, religious leaders, and lawmakers 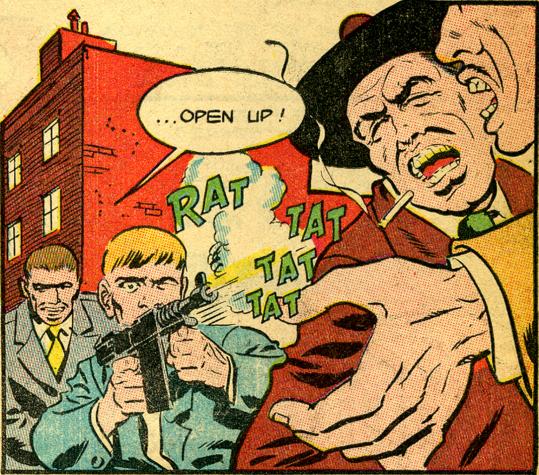 The Ten-Cent Plague: The Great Comic-Book Scare and How It Changed America
By David Hajdu
Farrar, Straus & Giroux, 434 pp., illustrated, $26

It was a mild revelation to me, when I had kids, that we would feed them a steady diet of "children's literature," and that with the exception of Daniel Pinkwater's collected works these predigested texts would be so insipid.

It was a revelation because, growing up in the 1960s and left to my own literary devices, I survived on comic books. My mother didn't like it, but the children's books of the time were thin gruel if you were accustomed to the thrilling life-and-death adventures of Spiderman, Batman and Robin, and the Fantastic Four.

Only later would I discover I had just missed out on the golden age of this strange and wonderful art form. During the 1940s and 1950s, artistic virtue and shameless vulgarity jostled in a vast and uninhibited comic marketplace that extended far beyond the familiar confines of Metropolis, Gotham, and Riverdale High. Crime, fantasy, science fiction, romance, and agitprop flourished in riotous profusion.

New York was the epicenter of this creative ferment, just as it was for painting, baseball, and musical theater. Everyone knows about Jackson Pollock, Jackie Robinson, and "Guys and Dolls," but few appreciate the role comics played in American culture. In those days the industry put out perhaps 100 million copies a week, each of them passed among several readers. Producing this colorful weekly avalanche required a small army of artists, writers, letterers, and others who grew out of the Depression and leapt at the chance to work at the intersection of art and commerce.

Even discounting for the lapsarian myths that tend to grow up around any paradise lost, this really was a golden age, and it glows all the more brightly in memory because of its ugly and abrupt collapse in a Gotterdammerung of bonfires, legislation, and social disrepute. "The Ten-Cent Plague" is David Hajdu's affectionate yet outraged account of this important but little-remembered segment of cultural history.

A key thing to bear in mind about all this is that the primary market was children. And in those days comics weren't just about superheroes fighting injustice. Two of the most popular genres were horror and crime, in many cases without any recurring characters or story lines. It was hard to build brand loyalty around these, and competitive publishers soon found themselves in a gory arms race to see who could put out more hideous stories and cover art.

In retrospect, it should not have been difficult to foresee trouble. Comics operated with none of the restrictions imposed on the movie business or other media. One popular comic, "Crime Does Not Pay," ran stories like "The Wild Spree of the Laughing Sadist - Herman Duker," which opens with a drawing of an armed man clutching a bruised and bleeding blond beauty by the hair. There is a dead man on a table, eyes rolled back in his head, blood pouring from a bullet hole in his forehead.

Criticism of comic books was often heard during the 1940s, but during the paranoid and child-focused 1950s it reached a fever pitch. Newspapers ran sensational exposés ("Sex and Sadism Rampant," blared The Los Angeles Times) while religious and civic groups organized anticomics campaigns, some of which involved ritual comic-book burnings. Self-appointed experts, in particular the progressive-minded psychiatrist Frederic Wertham, who lent a patina of medical research to the hysteria (if only by appearing before TV cameras in a white coat), insisted that comics were to blame for juvenile delinquency.

The comics' Waterloo came in 1954 during televised Senate subcommittee hearings in New York, held in the same room as the famous Kefauver committee hearings on organized crime. Bill Gaines, publisher of comics like "Tales From the Crypt" and "The Vault of Horror," was determined to answer the industry's critics in person, but bad judgment, amplified by Dexedrine and sleep deprivation, resulted in a disastrous performance that handed his opponents the kind of bloody ax routinely wielded in his publications.

Cravenly, if perhaps inevitably, the industry quickly pulled together a system of self-regulation that squeezed the vitality out of the medium. Still not satisfied, state and local lawmakers in venues from coast to coast adopted vaguely worded anticomics legislation that effectively kept the books off the newsstands. By the late 1950s the industry was just a shadow of what it had been in its heyday.

For Gaines, ironically, that catastrophic congressional appearance proved a boon of sorts by forcing him to focus on Mad, which got around the new restrictions by declaring itself a "magazine" rather than a comic book. Life for America's pre-adolescent boys would never be the same.

"The Ten-Cent Plague" is an admirable account of these events. Hajdu writes well and has performed the enormous service of interviewing more than 150 comic-book publishers and creators, which coupled with his archival research enabled him to produce a lively and nuanced portrait of a fascinating aspect of American culture.

Where the book falls a little short is in failing to grapple with some of the important questions it only implicitly raises. Some of the criticisms leveled at comics, for instance, sound more than a little accurate, including the charge that heroes have a fascistic tendency to ignore the rule of law. "Virtually every comic-book hero," the author acknowledges at one point, "tended to use illegal or socially unacceptable methods - destruction of property, unprovoked assault, taking suspects without charges, and sometimes letting them slip out of the sky to their deaths."

Nor does the book deal fully with the ticklish question of the comic-book audience, much of which was underage. What, for example, is the proper response of society to junk culture aimed at kids? Is censorship always bad? Shall we permit the screening of snuff films in nursery schools? Weren't publishers of the very worst comics responsible for at least some of the backlash?

Nor does Hajdu take up the important distinction between private citizens criticizing comics, on the one hand, and government action to suppress them on the other. Surely the enemies of unbridled free speech, misguided though they may be, ought to have the same right of self-expression as the creators whose works they rightly or wrongly despise.

Yet ultimately these are the very issues that make the book so valuable, and its shortcomings in this dimension are strengths of a sort as well. By and large free of meditation and moralizing, "The Ten-Cent Plague" keeps the focus on the remarkable men and women who produced the comics, the purveyors of junk science and Puritanism who hounded them, and the elected leaders who adopted egregiously unconstitutional legislation to drive the comic-book publishers out of business.

Today's popular culture features music and images arguably worse than anything the comics publishers managed to present, sequestered as it was safely within the frames of their pages. The vulgarity they pioneered now knows no bounds, yet government censorship presents nary a speed bump to its progress on the information superhighway. Americans are left instead to filter the whole mess for themselves and their children. Thank God.

Daniel Akst is a writer in New York’s Hudson Valley.