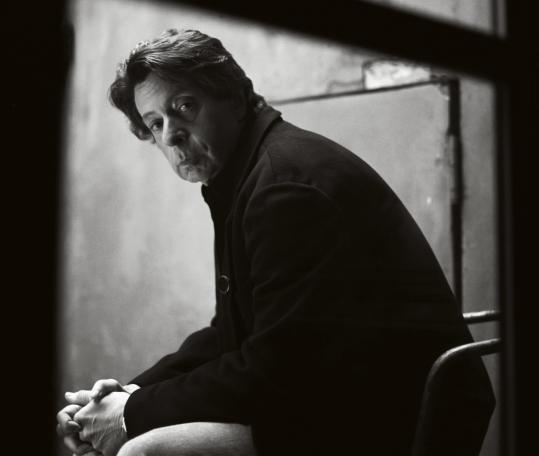 Richard Price is the author of eight novels and shared an Edgar Award as a co-writer of the HBO series "The Wire." (Damon Winter / The New York Times)
Email|Print|Single Page| Text size – + By Maud Newton March 16, 2008

Luxury lofts have replaced flophouses. Haute cuisine has supplanted the soup kitchens. Post-Giuliani, Manhattan's once-edgy Lower East Side seems like a Wi-Fi wonderland, a kind of theme park where, as writer Richard Price has observed, young would-be artists flit between coffee shops, pretending to live in a never-ending production of "Rent." Worrying over the effects of this gentrification has become such a cliche that, at the intersection of the Bowery and Delancey, a giant Village Voice billboard hovers, pointlessly asking, "Where have all the junkies gone?" Of course even the shiny, happy new New York City is host to the occasional stabbing, to your brutal sexual assault or botched drug deal, but what we really mean when we talk about crime waves in the oughts is an uptick in iPod rip-offs on the subway. Last year, according to David Simon of "The Wire," there were more corpses shown on the three "Law & Order" franchises than there were actual homicides in Manhattan.

So far the public's appetite for outdated New York murder stories rages on, but one of the finest practitioners of the urban crime novel, Richard Price, isn't content to live in the past. Nor does he allow the place where he lives to be defined only by its newcomers. Beyond the restored tenements and the bars done up to look like old pharmacies, there are the projects, and there are the cops. There are families who've been in the area for generations. Price's latest novel, "Lush Life," explores the collision between the old and new Lower East Sides, the disconnect between the faux-Bohemians who swan through the streets, coked up, in their moccasins, and the kids from the projects who are forever being stopped and frisked by the Quality of Life Task Force.

Eric, restaurant manager/writer, used to be charmed by his neighborhood's "ethnohistorical mix 'n' match" but finds it is, "much like himself, getting old." He has been abandoned by his girlfriend, aged out of the hipster contingent, and all but given up on his screenplay, and he can barely conjure up the patience necessary to interact with Ike, the likable, fresh-faced, elaborately scruffy bartender his boss has hired. Ike, naturally, is also an aspiring writer - you can't throw a joint in the 'hood without hitting an MFA - but he's not around for long.

Out with Eric and a friend who is falling-down drunk, Ike refuses to hand over his wallet when a couple of kids from the projects stick them up. "Not tonight, my man," he tells the kid who's put the gun in his face. Or at least that's the story Eric tells the cops, who soon make him the prime suspect in Ike's murder.

Precious few writers can draw a character as quickly or sharply through dialogue as Price can, and the criminal investigations that take center stage in his books give his stories a satisfying structure. No doubt his background in film and TV helps, but Price is right to point out, as he does in interviews, that fiction is a wholly different medium, with its own set of requirements.

The scenes in "Lush Life" are sure-footed and brisk, and while you may sometimes find yourself wanting a little more in the way of visuals or psychology, the characters gather complexity as the story steams forward. Yolanda, a smart police detective from the neighborhood with a knack for flattery and the ability to make her eyes go dewy with something that seems like empathy, is a particularly fascinating creation. Her partner, Matty, shares with Eric and many of Price's most memorable male characters an alienation born of a potentially paralyzing depression from which he distracts himself by obsessing over Ike's murder. Tristan, a blank gunman from the towers, has a penchant for writing incoherently violent poetry that is, by turns, chilling and unintentionally hilarious. "Droppin' jewels in front of fools / Every word like a school / standin' high, / do or die, / you can't never meet my eye."

From "The Wanderers," through "Clockers" and "Samaritan," Price's fiction has partaken of a dark, dry humor that emerges mostly in the characters' conversations, but "Lush Life" is his funniest book yet, more overtly comedic than any that precede it. If the novel has a failing, it's that Price doesn't dig down quite as relentlessly into the tar pits of his characters' motivations as he's generally done in the past.

"Lush Life" is a satirical but sympathetic take on existence here at what, given the subprime mortgage fiasco and concomitant layoffs on Wall Street, may be the end of the early 21st-century economic boom.

At a friend's wedding last fall, I was talking with the jazz singer Mary Foster Conklin about the transformation we've seen over the past decade. "Do you think the city has lost its soul?" I asked her. She didn't. "The image I've always had," she told me, "is that New York is like a compulsive gambler. When times are good, it's flashy suits and drinks all round. When times are bad, the clothes are threadbare, and friends disappear." Whether and where crime might increase or what form it may take if the city slides into recession in the next few years is anyone's guess. But one thing is certain: If we're lucky, Richard Price will be there to get it all down.

Maud Newton, of the literary website MaudNewton.com, is a writer living in Brooklyn.