Dreams deferred in a harsh landscape 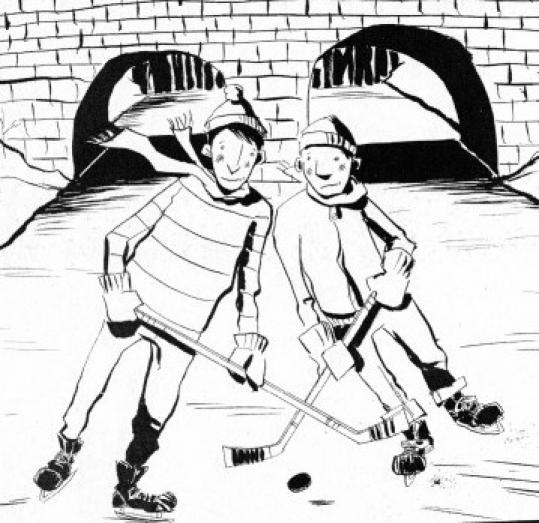 Cartoonist Jeff Lemire enchants with the second of his three-volume series of interrelated Essex County tales. Set in northern Canada, these books depict lives governed by choices as harsh as the Canadian winter. Presented in spare black-and-white lines, "Ghost Stories" focuses on the Lebeuf brothers, Vince and Lou, and is told from the point of view of Lou, now a deaf old man, constantly reliving decisions made in his youth that tore his family apart.

As young men, both Vince and Lou played for the Grizzlies, a semi-professional hockey team in Toronto. Lou was a solid player, but Vince was the blossoming star. Aware that his brother didn't realize the full extent of his abilities, Lou purposely made Vince angry, inspiring him to play better. Primarily as a result of Vince's emerging talent, with Lou as the able sidekick, the Grizzlies went deep into the playoffs before being eliminated by Brampton.

The season over, Vince married and moved back to the family farm, giving up hockey. Lou remained in the city and drove a train, despite Vince's dream that the brothers would live and raise families together. What Vince didn't know was that he fared better than Lou at love, just as he had at hockey; Lou had been in love with Beth, the woman Vince married. The rest of the graphic novel is primarily the story of Lou in bars with other men like him, rootless and waiting for a defining moment, a spark that will ignite their lives. For Lou one of those moments occurs 25 years later, when he returns to the family farm and learns a terrible secret involving Vince's daughter, Mary. Another moment presents itself years after that, when both Mary and Beth are killed in a car accident. Vince is seriously injured in the crash, so Lou returns to the farm and cares for him. After Vince dies, Lou is alone on the farm with his memories endlessly replaying in his head.

Lemire is an able cartoonist and captures a myriad of emotions in his deceptively simple drawings. In his hands, lines expand to reveal generous characters, and shrivel to indicate characters withdrawn into themselves. While his style owes a debt to Mike Mignola ("Hellboy") and Jack Kirby ("The Fantastic Four"), Lemire is able to imbue his drawings with greater depth of emotion, in part because this is not an improbable story, but a tragically real one.

Although some characters from the first book in the series, "Tales From the Farm" (a winner of a 2008 Alex Award, for adult books with specific appeal to teenagers), make appearances in "Ghost Stories," the second installment stands on its own because the tale of the Lebeuf brothers is a contained one. And the lessons it teaches stand on their own as well: If things come between you and the people you love, find ways to resolve them, and forgive the past if for no other reason than that then you can forgive yourself.

Stephen Weiner's books include "The 101 Best Graphic Novels" and "Faster Than a Speeding Bullet: The Rise of the Graphic Novel."