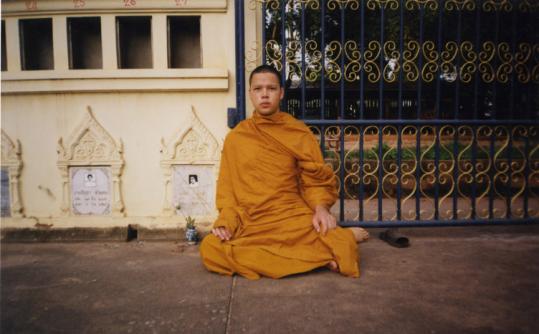 Jaed Coffin grew up in Maine, spent a summer in a Buddhist monastery, and has worked as a boxer and lobsterman.
Email|Print| Text size – + By Jan Gardner February 3, 2008

McIntyre and Moore Booksellers in Somerville will close when its lease expires on March 31, but it already has designs on a new, albeit smaller, home in Cambridge. Final details of a lease in Porter Square are being worked out, according to co-owner Daniel Moore. He and Michael McIntyre founded the used bookstore in Harvard Square in 1983. It moved to the current 4,000-square-foot storefront in Davis Square 10 years ago. McIntyre and Moore has hosted the monthly Davis Square Philosophy Café for five years, and publication parties for the twice-a-year journal Ibbetson Street for nine years.

In the new young-adult novel "First Daughter: White House Rules" (Dutton), the title character is an irrepressible Pakistani-born adoptee, Sameera "Sparrow" Righton. Sparrow, whose Republican father has been elected president, is so irrepressible that she has a real-life blog.

Sparrowblog.com, written by "First Daughter" author Mitali Perkins of Newton, tracks the news about children of the 2008 presidential candidates with a positive spin. The year-old blog, offering encouragement and advice to candidates' offspring, has drawn comments from Elizabeth Edwards as well as Mitt Romney's son Josh. Sparrow is protective of Bridget McCain, the Bangladeshi-born adopted daughter of John McCain who, like Sparrow, has dark skin. On a less serious note, Sparrow has suggested that Oprah Winfrey campaign for Barack Obama "in all the O places," such as Oregon, Ohio, and Oakland, Calif.

Perkins will launch her book with a party and political trivia quiz at 2 p.m. today at the Wellesley Booksmith, 82 Central St., Wellesley. Invitees include Cate Edwards, John Edwards's daughter, and the five Romney brothers. Check sparrowblog.com for updates.

A heart in two worlds

Born in Maine to a Thai mother and American father, 28-year-old Jaed Coffin has gone to extremes to find his place in the world. A graduate of Middlebury College, he spent a summer in Thailand as a Buddhist monk and 18 months in Alaska, where he was a middleweight boxer.

His memoir, "A Chant to Soothe Wild Elephants" (Da Capo), is not only a coming-of-age tale but a look at life inside a Buddhist temple in his mother's native village. "It was not necessarily the most rigorous experience," Coffin says, describing how some monks lounged around smoking cigarettes all day. Coffin was a dutiful monk, but he decided it wasn't the life for him.

Today he still feels torn between Thai and American values, grappling with what he calls his "not sure heart." Now he's working on a book about boxing. The sport requires a commitment and devotion similar to that of a monk, he says. "Boxing is violent," he adds, "but it's brotherly."

"Stranger in Paradise," by Robert B. Parker (Putnam)

"Comeback Season: How I Learned to Play the Game of Love," by Cathy Day (Free Press)

Pick of the week

Sarah Farnsworth of Briggs Carriage Bookstore, in Brandon, Vt., recommends "The Invention of Everything Else," by Samantha Hunt (Houghton Mifflin): "An unlikely friendship develops between inventor Nikola Tesla and the curious maid, Louisa, who snoops in his hotel room. Full of vivid imagery, sounds, memories, and dreams, this novel is a sweet story of just how normal it is to be different."