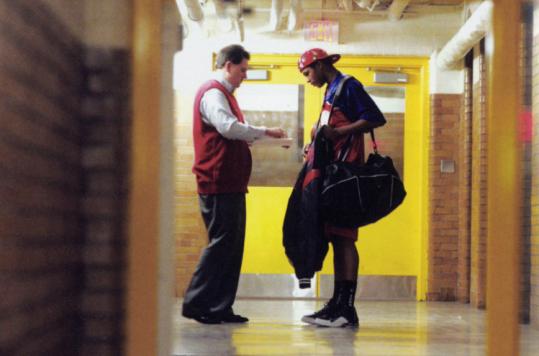 Team sports, like life, are never simple. Beneath the concrete final score, there are games within games, small plays leading to big plays, a melding of diverse talents and personalities into a cohesive (or disparate) unit. Rarely is that tapestry revealed as fully, and as convincingly, as in Neil Swidey's "The Assist."

Swidey, a staff writer for The Boston Globe Magazine, introduced readers to the Charlestown Riders in a laudable three-part series in 2005 that detailed the school's exemplary run of five state championships over six years. With "The Assist," he continues to mine this abundant vein. Swidey employs the Charlestown High School basketball program as a vehicle to explore Greater Boston's somewhat checkered history, from its revolutionary beginnings and the busing debacle of the 1970s to the current segregated inner-city milieu, as well as the labyrinth of emotional and social ties between classmates, teammates, and family members. It's a tall order, but one that Swidey handles, for the most part, with a deft touch.

At the center of this complex work is a complex man, Jack O'Brien, the Charlestown coach. Obsessive, demanding, devoted, O'Brien is a middle-aged, single white man who still lives in his mother's home in Medford. While that tidy description alone might raise eyebrows, Swidey digs deeper, and unearths an intricate portrait of a man wrestling with his own demons while fully committed to his calling as a coach. In fact, it's clear that "coach" is far too limited a term with regard to O'Brien. He also serves as parent, taskmaster, mentor, chauffeur, guidance counselor, and confidante to his athletes, most of whom are not Charlestown residents. Still, O'Brien "was no saint," writes Swidey. "A saint gives without expecting anything in return. O'Brien needed his players and their problems as much as they needed him."

Held in high esteem by his present and former players, and to a slightly lesser degree by colleagues and parents, O'Brien became a lightning rod for critics with his all-consuming approach to life, basketball, and, apparently, winning. "But if all [O'Brien] cared about was winning, he would have done things differently," writes Swidey. "He would have steered his best players to the easiest classes rather than the more challenging ones. He would have forgotten about his former players rather than root himself in their lives."

O'Brien's team is an ever-changing collection of inner-city kids who alternately bristle and blossom under his iron rule. They all initially buy into O'Brien's belief that a singular devotion to basketball, decorum, and decent grades will provide opportunities to escape their troubled pasts. Whether they can adhere to O'Brien's structure, or will surrender to the temptations of the street, is a rich and recurring theme.

"Although O'Brien told people all the time that his record of getting kids to college meant more to him than all the state and city titles, he knew that his whole program was built on winning," writes Swidey.

In "The Assist," Swidey, the proverbial fly on the wall, sees everything, it seems, and delivers his cogent observations in crackling prose, with only a few missteps. Like O'Brien, Swidey at times slips into street vernacular, with predictably awkward results. There are curious oversights, such as the all-too-brief mention of Charlestown's razor-thin overtime win against Lynn Classical in the 2006 state tournament, or the author's occasional failure to name names (such as O'Brien's simmering feud with former Salem News sports editor Bill Kipouras). Last, the author gives little credence to O'Brien's many detractors, dismissing most criticisms out of hand.

If there's one glaring shortcoming to "The Assist," it's the final third of the book. It feels like an appendage, as if Swidey felt obligated to complete the circle he started with his magazine series. The narrative also falters, as repetitions seep into the anecdotes of the dangers of the streets, O'Brien's well-intentioned yet overbearing persona, and post-grad players searching in vain for a support network similar to that found at Charlestown High.

Still, Swidey builds such a commanding lead though the first two-thirds of the book that he still arrives at the finish line with a flourish. There is no neat ending to this tale, and that's refreshing. O'Brien, who ended his glorious Charlestown run mired in indecision about whether to leave or stay, didn't have all the answers. Neither does Swidey. If they did, "The Assist" would be far less compelling.

The Assist: Hoops, Hope, and
the Game of Their Lives
By Neil Swidey
PublicAffairs, 358 pp., illustrated, $26

Brion O'Connor is a freelance writer, and can be reached at brion@inspiredink.com.