In his new essay collection, John Updike offers an effortless mastery of form and content 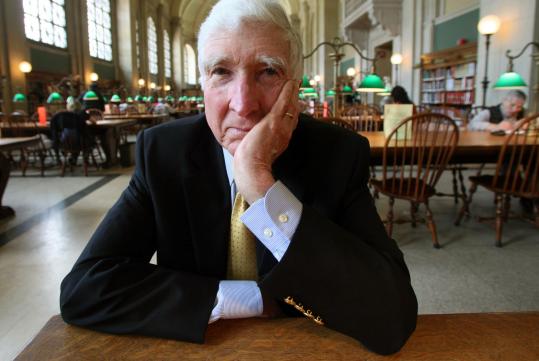 Updike (shown in 2006 at the Boston Public Library) writes from "an adolescent yearning to become a professional writer." (Robert Spencer for The New York Times)
Email|Print| Text size – + By William H. Pritchard December 9, 2007

The first place to turn in one of John Updike's collections of essays is the preface, in order to see how gracefully he will manage things this time around. Very gracefully indeed, for after a dedicatory confession of agedness ("To David Remnick and Henry Finder who kept me in the game into the late innings") he entertainingly apologizes for the book's length. He had hoped that "thanks to the dwindling powers of old age" the collection would be significantly shorter than its recent predecessors, each around 900 pages. No such luck, since after sorting and selecting "there was no escaping the accumulated weight of my daily exertions." Fine word for it, "exertions," by way of modestly naming the activity that, along with turning out novels, short stories, and poems, this indefatigable writer practices. He couldn't stop it if he tried.

Like previous collections, "Due Considerations" contains a number of excellent essays and introductions about writers and their works: Henry David Thoreau's "Walden," Nathaniel Hawthorne's "The Blithedale Romance," Henry James's "The Portrait of a Lady." Under the rubric "General Considerations" he gives us his thoughts about playing poker, about the cars he's owned, about his fear of the water; and there is a concluding section, "Personal Considerations," which I found myself browsing in even before navigating what precedes it. By far the largest section of pages - roughly 200 of them - are devoted to reviews of current fiction, and herein lies a problem for the reader who proposes not just to sample Updike's prose but face up to it in detail. For no one but the most well read of fiction consumers is likely to have read many of the novels he writes about with such care and at length. In fact it is the very capaciousness and particularity of his treatment of a given novelist that may cause the putative reader of, say, Orhan Pamuk or Michel Houellebecq to shy away from what Updike has to say about their books - not wanting to approach them with such well-articulated preconceptions.

In his preface he wonders whether his "customary geniality" when he's dealing with a foreign writer or factual topic doesn't "sour" somewhat when he reviews a novel by an American contemporary. I didn't find this to be the case, and even if there is partial truth in it - after all, he should know - it would only slightly qualify what is invariably a generous and carefully directed attempt to let the novel speak for itself as well as be spoken about by the critic. Nothing could be further from his procedures as a fiction reviewer than the slash-and-burn operations of a Christopher Hitchens or a James Wolcott, critical minds not to be taken lightly but not always to be trusted. Updike's aim is that of "urging authors upon us," and if at times the urging seems more than we need (more than 14 pages on three novels of the Australian Peter Carey) so be it.

In contrast to the voluminous novel reviews, there is little engagement with poets: "The brash critic in me turns shy at the threshold of poetry" is his prefatory apology. On the basis of two essays included here, an introduction to his selection of poems by the neglected Karl Shapiro, and a longish review of Philip Larkin's second "Collected Poems," we must regret his shyness. His overview of Shapiro's work - his second volume, "V-Letter and Other Poems," won the 1945 Pulitzer Prize for poetry - is by far the best introduction to a poet whose long and strenuous life was devoted "to the modernist battle . . . a rescue of language from poetic conventions, easy assumptions, usages worn smooth, polite palaver, rhetoric." The essay on Larkin is even more rewarding since here Updike is dealing, and with the utmost subtlety, with a great poet. His extended description of the sequence made up by the first 10 poems of Larkin's first mature collection, "The Less Deceived," is a model of attentive reading and listening. About Larkin's much-quoted short poems with their arresting beginnings - "Sexual intercourse began / In 1963 / (Which was rather late for me)" - he notes that they possess a "lapidary compression" recalling Ben Jonson and Robert Herrick. Updike wrote his Harvard undergraduate thesis on Herrick and followed it with 50 years' worth of his own verse - not bad equipment for the critic of poetry.

There is much here about The New Yorker, about James Thurber and E. B. White, about cartoons and cartoonists, Saul Steinberg and William Steig, all of predictably high quality. What's astonishing, as always, is how Updike manages to turn out 1,000 words or less of interest on any subject, as when GQ asked him, in 1999, to select his favorite year from the disappearing century. He chose 1946, the year in which "nothing much happened, which was the beauty and wonder of it": "The Dow Jones had a high of 212 and a low of 165. It was a world of backyard gardens, of men wearing sweat-stained fedoras and suspenders, of Flag Day and give-away cigarettes and Dish Night at the movies."

It was also the year in which he became a teenager. Fifty years later, in a foreword to a limited edition of his "Licks of Love," he is 68, "an age at which most of my age-peers have retired and a few have already died. I am packing my bag, it may be; at least my desk, as I write these words, is otherwise ominously clear." Now, seven years hence, it appears that the desk has been cluttered up yet once more. Our gratitude to the man, the writer, who persists in the cluttering.

William H. Pritchard is professor of English at Amherst College. His most recent book is "Updike: America's Man of Letters."