Faith, science, censorship, and the search for Peking Man

Since Galileo's heretical insistence that the Earth revolved around the sun, science and religion have clashed. The Inquisition imprisoned Galileo, but his heliocentric views won posthumous victory. If present-day skirmishes over stem-cell research, cloning, and evolution are any indication, the centuries-old battle continues unabated. Brookline's Amir Aczel ("Fermat's Last Theorem"), who writes elegantly and accessibly about the history of science, tells the eye-opening tale of one scientific genius caught in the crossfire.

Teilhard De Chardin (1881-1955) helped uncover one of the most important scientific finds of the 20th century: Peking Man. The French scientist was working in China alongside an international team of anthropologists, geologists, and paleontologists in December 1929, when a human skull was excavated. The skull turned out to be 500,000 years old and provided strong evidence in support of Charles Darwin's theory of evolution. Teilhard analyzed the skeletal evidence and deemed Peking Man "the missing link" between apes and man.

While Teilhard's role in the Peking Man excavation would have been the crowning achievement of any scientific career, he confronted a mammoth obstacle in spreading his scientific findings. Teilhard was a Jesuit priest, and thus subject to censorship by Vatican authorities. Not only did the Vatican censor Teilhard's groundbreaking scientific work in his own life, it continues to limit it. For the faith, the Book of Genesis explains the origins of mankind. When Aczel visited Rome in 2006 to research Teilhard's file, documents containing the Vatican's decision to censor the French priest's work remained unavailable for review.

Aczel's narrative is part biography of the fascinating Teilhard, part history of the theory of evolution, and part exploration of the rifts between science and faith. Teilhard himself saw no contradiction between his role as a scientist and man of God. Indeed, he viewed evolution as bolstering his faith. In his "The Phenomenon of Man," censored during his lifetime, Teilhard wrote that "Man is not the centre of the universe as was naively believed in the past, but something much more beautiful - Man the ascending arrow of the great biological synthesis."

As Teilhard became more famous as a scientist, the Church viewed him as a public relations nightmare it needed to control, Aczel writes. Ironically, Teilhard's greatest achievement, his role in the discovery of Peking Man, came about because the Vatican banished him to China. As Aczel explains it: "Jesuits found it unacceptable to have one of their priests . . . promulgating views that were unacceptable to the Catholic Church." When word came down that Teilhard should decamp from Paris to China, the French priest complied without complaint.

Aczel skillfully describes Teilhard's unconventional life, including his unconsummated love for an American sculptress named Lucile Swan, his getting kidnapped by Mongols in China, and his being caught in the middle of the Japanese invasion of China. Aczel concludes the book with the mysterious disappearance of the excavated relics of Peking Man. After the Japanese invaded China, Aczel explains, the American military attempted to sneak Peking Man out to safety. Alas, the skeletal remains were lost and remain so.

It is perhaps fitting to close with Peking Man's disappearance, because Teilhard's own life's work had largely disappeared from view. Aczel, like his subject, has done an important work of historical excavation. Perhaps Teilhard's mystical blending of science and faith may show us the way forward, but there's little reason for optimism in the tale. 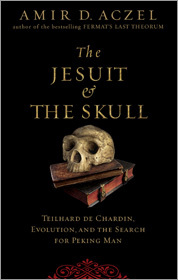 The Jesuit and the Skull: Teilhard De Chardin, Evolution, and the Search for Peking Man
By Amir D. Aczel
Riverhead Books, 304 pp., $24.95