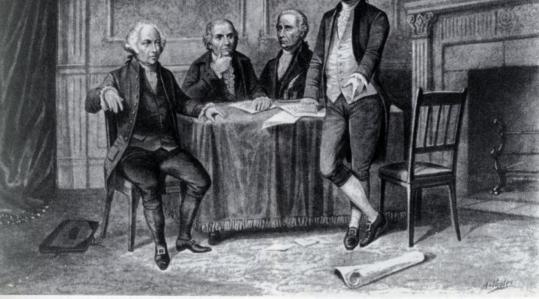 In his sobering, yet upbeat, history of the controversial presidential election of 1800, "A Magnificent Catastrophe," Edward J. Larson took a big risk in plowing this familiar ground. Since the hanging chads of 2000, there have been no fewer than three reader-friendly narratives on the 1800 contest between President John Adams and Thomas Jefferson, his vice president. Larson does not attempt to exhaust the possibilities, and he doesn't exhaust our attention either. He zeroes in on what it was about 1800 that made the election so wild, so modern, and so fascinating.

With books on the Founders still dropping on us like flies on the Fourth of July, it's almost startling to read one that turns, gradually, original. Larson begins with generalities about the Founders that we've all heard before: tall and sandy-haired Jefferson, portly and "vain to a fault" Adams. Their inevitable differences reflected real divisions about America's future. But the differences that Larson finds most central are astoundingly relevant, even contemporary. He sees party, politics, and culture where the biographers spy personality and body types. Federalists championed executive leadership, a strong army, and England. They "freely denounced Jefferson as a Deist or atheist while calling on America's Protestant majority to support their party's God-fearing candidates."

Democratic Republicans responded by damning their opponents as paranoid monarchists willing to sacrifice American liberties, including freedom of speech and religion, to imaginary threats - and their own political ambitions. An undeclared war on France, the suppression of opposition journalists, a law aimed at illegal aliens, and Jefferson's reputation as a man of science allowed the election of 1800 to also serve as a referendum on a range of issues, from to civil rights to foreign relations. In August 1800, a foiled slave rebellion in Jefferson's own Virginia built on, and in turn reinforced, the sense that a glorious or tragic change might occur in November.

Larson builds suspense as contemporaries experienced it, out of the key Jeffersonian victories in New York and Pennsylvania in late 1799 and early 1800. At a time when state elections occurred at different times of the year, political strategies had to respond to distinct local developments. The real hero here is Aaron Burr, who turned out unprecedented numbers of voters in New York City. With a party change about to occur when the new Pennsylvania legislature was sworn in, nobody knew who would determine how electors would be selected in that key swing state - by the new Jeffersonians in the state House, or the Federalists who had hung on to the state Senate. The result: maneuverings in other states, which threatened to split their electoral votes or change the mode of choosing them. Seven states did have popular election of electors, but some elected by district, others by majority statewide vote. Backdoor intriguers went to work in part because national leaders could not predict who would be elected president. The real politics was local.

Meanwhile, the ruling party began to implode over the war. President Adams pulled back from Federalist war-mongering, angering supporters of General Alexander Hamilton, commander of the Additional Army created in 1798. Adams forced Hamilton's party hacks out of his Cabinet and took his case to the people, in what Larson calls the first true presidential campaign trip. Add to that the problem of a vice presidency conceived less as a ticket balance than as a separate office that went to the second-highest vote getter (they fixed that problem by constitutional amendment soon after), the result was a nail-biting, months-long drama followed by a tie, and another opportunity for Federalists. In the best-known, final act of the drama, Hamilton and his cronies tried to get Jefferson's seeming ticket partner - Burr! - elected to save themselves and the country from the godless sitting vice president. All this occurred as the seat of government moved to swampy, underbuilt Washington, D.C.

The rest - Jefferson's victory - is history, and more than that. Constitutional lawyers are working overtime trying to save us from another undemocratic nightmare in 2008. Larson's fascinating book shows how democracy in the states and the power of the presidency combine to create instability in a winner-take-all system. It's magnificent, it's catastrophic, and the Founders were just as confused and excited about it as we will be next November - but hopefully, this time, no later than November.

David Waldstreicher teaches at Temple University and is the author of "Runaway America: Benjamin Franklin, Slavery, and the American Revolution."