Writing With the Devil

Norman Mailer's The Castle in the Forest is narrated by an assistant to Satan who is adviser to the young Adolf Hitler. How lovely. 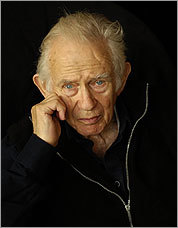 What was it like to spend several years writing a book inside the mind of a devil?

It was refreshing. It opened all sorts of novelistic possibilities; it enabled me to enter many people’s minds.

Do you believe in God?

I believe God is a great artist, a great creator, and is doing the best that he or she can do against serious odds. And these odds are embodied by a concept or an element called the devil.

Then you believe in Satan, too?

Well, it isn’t that I believe in Satan, in that Satan will get me if I open my yap again. But I do believe that there are evil principles in the universe, and I think they’re embodied in something we call the devil or Satan or what have you.

I would call this a Jewish book – probably your first – because it addresses Jewish concerns and singular Jewish tragedies. Do you agree?

This book is going to be very upsetting to a great many Jews. They’re going to say, “How could you do it?” This boy, up to 16, had periods when he was not unsympathetic. There are times when he was just a little boy. “Why are you doing that? You’re making Hitler more alive.” And my argument would be, in return, that it’s very important to try to understand the nature of Adolf Hitler, because he’s absolutely unlike any other villain in history.

But by giving this devil so much influence over Hitler, aren’t you diminishing his culpability?

I don’t think I changed the equation. What’s important is that there’s an evil force in the world which is huge and immense and in my opinion is probably equal to God. I think they’re having an immense and terrible war.

You hint at a sequel at the end of this book.

Hopefully I’ll still be around. But to promise it as this point would be a folly. I’ve promised too many books in previous years. [Mailer turned 84 on January 31.]

What about a sequel to Harlot’s Ghost?

I had finally, after seven years, gotten ready to write the sequel to that, and then it was as if, “No, no, no. This is the book to write.”

You’ve lived in Provincetown for many years and have seen a lot of change.

It hasn’t changed that much. The people have changed totally. And the outskirts of the town, yes, a lot of fancy architecture. But the middle of the town’s the same. Also, I tend not to be nostalgic, because I think nostalgia is for adolescents.

Do you like it better in summer or winter?

I like it best now. It’s good for work. In the summer it’s kind of like St. Tropez, it’s just insane. And I don’t mind bad weather; I do a lot of writing when the weather’s bad.