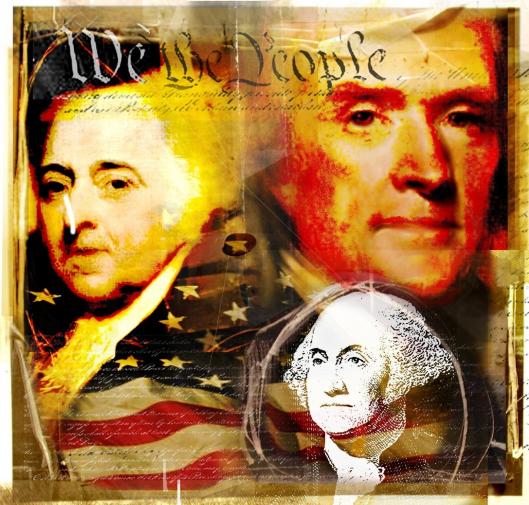 American Creation: Triumphs and Tragedies at the Founding of the Republic
By Joseph J. Ellis
Knopf, 283 pp., $26.95

Joseph Ellis doesn't like the direction academic history has been taking lately, and he particularly resents the violence the ivory-tower crowd has done to the reputations of the "revolutionary generation." "The currently hegemonic narrative within the groves of academe - race, class, and gender are the privileged categories of analysis - customarily labels (and libels) the founders as racists, classists, and sexists, a kind of rogues' gallery rather than a gallery of greats," he writes.

Ellis rejects this view as "adolescent" and "Oedipal" - but he also rejects its opposite: the unreflective veneration so often accorded Washington, Adams, Jefferson, and the others. He has spent much of his productive career pointing out that the Founders considered one another rather less than demigods, and to demonstrating that they weren't always wrong.

In his new book, "American Creation," Ellis again strikes a balance between laudable achievement and blameworthy failure in America's founding. Among the achievements he includes American independence, the creation of the American republic, the blurring of national and state sovereignty in the Constitution, and the establishment of political parties. The principal failures he identifies are the survival of slavery and the brutal treatment of American Indians.

Ellis is the reigning master of the episodic approach to history. In previous books and again here he eschews a continuous rendering of a period - in this case the years 1775 to 1803 - in favor of focusing on a handful of discrete events and brief stretches of time. As he has before, he ties the events closely to famous individuals. A chapter on the decision for independence features John Adams. Next comes a chapter on Valley Forge that trails George Washington through the snow (but debunks the vision of the Continental Army commander falling to his knees amid the drifts to seek divine guidance). Ellis then jumps a decade to the Constitutional Convention of 1787 and makes James Madison the hero of the hour. The Federalist decade of the 1790s gets two chapters; the book closes with Thomas Jefferson purchasing Louisiana from France in 1803.

Ellis's style is discursively delightful. "Narrative is the highest form of historical analysis," he remarks. As his narrative unfolds, so do his conclusions, with such gentle art as almost to compel assent.

But only almost. One can't reasonably argue with Ellis about independence and the creation of the American republic being major accomplishments of the Founders. And his reemphasis that America was established as a "wholly secular state" is as timely as it is correct.

But accepting his praise of the Founders for fudging the issue of sovereignty requires ignoring 80 years of American history. This fudge was hardly a strength of the Constitution; rather it was the document's - and the early republic's - most worrisome flaw. Madison knew as much. He lamented the "evil of imperium in imperio," as he and his contemporaries called the confusion over whether the national government or the states took precedence, and he left the convention disheartened at the delegates' failure to establish the priority of the nation. His subsequent argument, in the ratification debate, that the failure was a virtue was much like his similarly counterintuitive contention that large republics were more stable than small ones - namely, the tactic of a clever lawyer making what he could of a weak case.

And it was just as mistaken. The last chapter of the Constitutional Convention wasn't the ratification debate but the Civil War, which occurred precisely because the sections of the sprawling republic had grown so far apart as to be foreign to each other, and because neither the advocates of national power nor the defenders of states' rights could prove the other side wrong in a court more civilized than the battlefield.

No one will dispute Ellis's assertion that the Founders' failure to end slavery or to find accommodation with the Indians should be viewed as tragic. The former might have been avoidable. The members of the Constitutional Convention agreed to ban the Atlantic slave trade after 20 years, but they balked at anything similar for slavery itself when some of the Southern delegations threatened to reject the new charter if it included any further infringement on what the Southerners took to be their rights in human property. The Southerners might have been bluffing. If not bluffing, they might have changed their minds once the Constitution passed muster with the rest of the states, and they faced the prospect of being left out. Yet the convention declined to press the issue, and slavery was allowed to persist, despite the egregious affront it gave to the morality on which republicanism rested.

An accommodation with the Indians appears never to have been in the cards. Ellis reaches this conclusion after devoting a fascinating chapter to efforts by Washington, War Secretary Henry Knox, and Alexander McGillivray, one of the most astute Indian leaders in American history, to carve out a domain for the Indians east of the Mississippi. Their efforts failed, primarily because they contradicted the desires and intentions of most Americans. Ellis observes, sadly but accurately: "Indian removal was the inevitable consequence of unbridled democracy in action."

Which raises a point Ellis might have pushed further. The Founders' very success tended to entrench their failures. Slavery was a minority preference from the start, but the federal system of the Constitution prevented the national majority from eradicating it short of war. A live-and-let-live policy toward the Indians might have suited the tidewater elites who ran the federal government during the first generation of independence, but it was unacceptable to the land-hungry Westerners upon whom political power devolved as the democratic promise of the American Revolution played out.

We can lament the failure of subsequent generations to match the high standards set by the Founders. But we can also blame the Founders for making things harder than they might have been.

H. W. Brands is the Dickson Allen Anderson Professor of History at the University of Texas at Austin. He is the author of "The First American: The Life and Times of Benjamin Franklin."